How long can you use ladders in various situations? 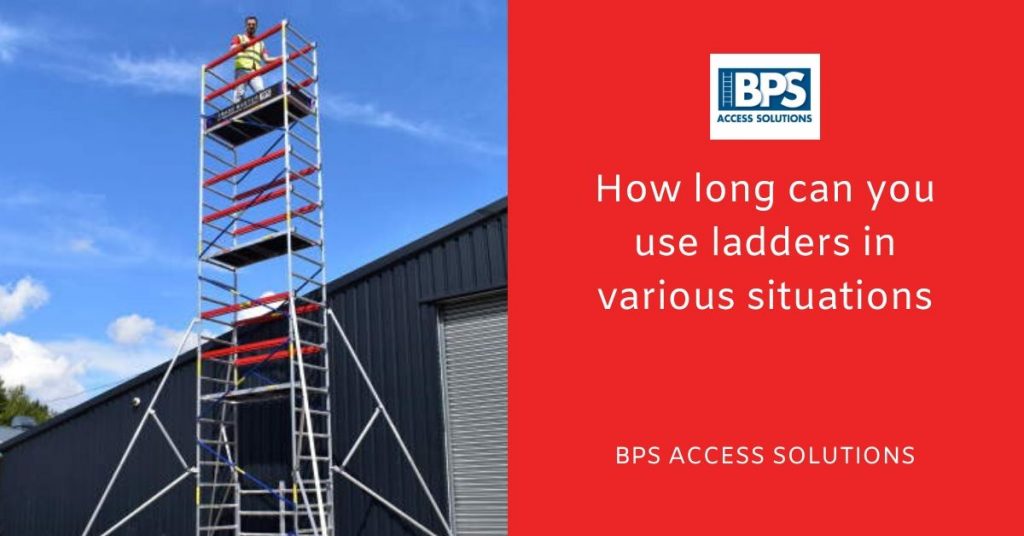 How long can you use ladders in various situations?

When working at height, whether it’s using ladders, tower scaffolding or podium steps, the first and foremost consideration should always be safety. Working at height comes with multiple dangers to both workers and bystanders as a result of falling equipment. According to the Health and Safety Executive, falls from height were the most common cause of fatal injury at work from 2013-18, accounting for an average of 37 instances per year.

The most basic precaution should be to ensure equipment is being used only in the conditions set out under manufacturer guidelines. If equipment is used outside of the specific working conditions it has been designed for, failure as a result of stress or misuse is much more likely.

It’s important to know what sort of time limits you should be working within when using a ladder in order to minimise the risk of injury. Below we’ll run through some common work situations and the various time precautions you should keep in mind in each one.

In many applications ladders are required simply to gain access to a fixture or fitting. Tasks like changing a light bulb, fixture or fitting often require minimal additional equipment. In cases like these, a worker may be using nothing more than a small tool like a screwdriver to get the job done. This means they will be carrying very little additional weight.

Carrying heavier tools, for example a power drill or an assortment of wrenches, can quickly amount to significant extra weight. With extra weight comes extra stress on the body, in particular the legs which are the main point of support on a ladder.

Working with minimal equipment and tools generally means that the amount of time a worker can safely expect to stay on a ladder is significantly longer.

Jobs outside often require heavier-duty tools than indoor jobs and may also require heavier duty clothes to protect workers from the elements. Both of these factors combined can quickly increase the overall weight a worker needs to support while working on a ladder.

A heavier load will also have an effect on the amount of time a worker can spend on a ladder before fatigue sets in. An additional 10 kg of weight may not sound like much, but it can significantly increase the strain on a worker’s legs whilst they support themselves on a ladder.

This generally means that the heavier the load, the shorter the amount of time an individual can safely spend working on a ladder. The extra weight puts additional strains on both the ladder and the user’s body.

Another important factor to bear in mind when assessing the safe amount of time a worker can spend on a ladder is the specific type of ladder being used. Ladders come in all shapes and sizes, and some are significantly more taxing to use over long periods of time than others.

Stepladders are often easier to balance upon due to their four feet and relatively low height. By comparison, a high extendable ladder will be much less stable and will require a user to maintain three points of contact at all times in order to remain safe. There are significant variations in the typical uses of different types of ladder, and also the safe amount of time each can be used for.

On top of this, many ladders are only designed for use in access situations. For example, it would be unsafe to use a vertically-placed ladder attached to the side of a scaffold tower to carry out work on a wall structure. It would not provide the structural integrity or protection for a worker that a tower scaffold would. As a result, it is always important to refer to manufacturer guidelines stating exactly where and when each ladder can be used.

As previously mentioned, the foremost safety concern when working with ladders should always be where and how they will be used. This includes the conditions of the workspace, for example whether it is inside or outside, as well as any other potential hazards.

It also includes the load limits and work certifications that each ladder is built to by the manufacturer. These are of paramount importance when planning any job involving a ladder of any kind. Exceeding manufacturer specifications is a sure-fire way to drastically increase the risk of injury to both yourself and those around you.

The Health and Safety Executive outlines a time limit of no more than 30 minutes for work on stepladders and leaning ladders. Working on either of these pieces of equipment for longer than 30 minutes increases the risk of worker fatigue.

In cases where you expect to be working for longer, it is best to look for alternative equipment which will allow you to work at height safely. For example, tower scaffolding or podium steps are a much safer choice for use in long-duration tasks due to the extra support they provide.

A more stable structure and footing, as well as far greater support for the worker in the form of guard rails and barriers, make tower scaffolding and podium steps far superior alternatives for lengthy periods of working at height.

If you would like to know more about which ladder, tower scaffold or podium step is best for you, please get in touch with us today.