What are podium steps? 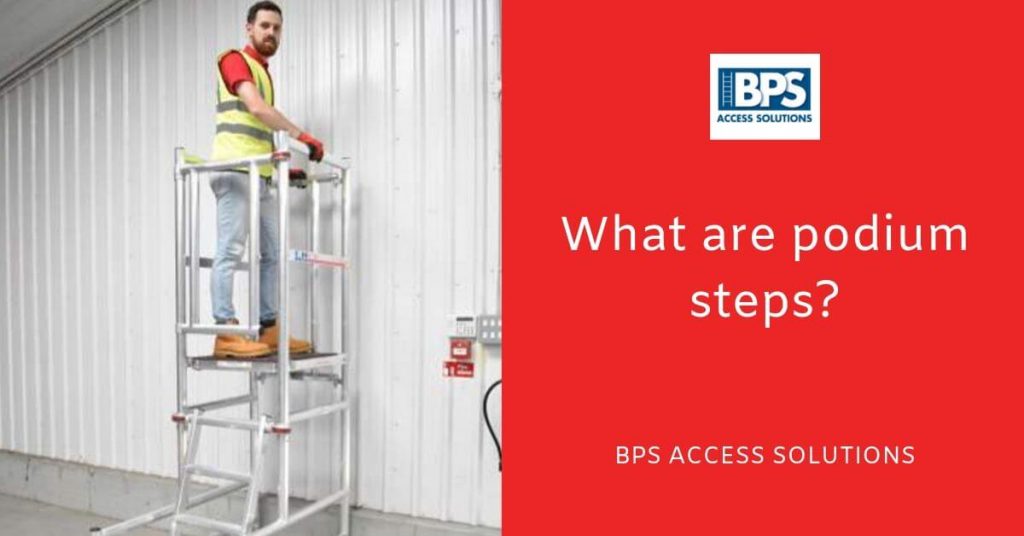 What are podium steps?

Ladders in their various forms are a common sight in workplaces and homes throughout the UK. No matter the job, there’s a ladder which has been designed specifically with it in mind. From the step ladder, which is good for low indoor tasks, to the telescopic ladder, which is highly adaptable for use at many different heights and scaffold towers for jobs that a ladder just doesn’t quite cut.

Despite their adaptability, most conventional ladders are somewhat lacking when it comes to safety features, making them unsuitable for use in more challenging work situations.

Features of the podium step

Podium steps are easily distinguishable by the enclosure which sits above the access steps. This caged platform is the podium step’s main safety feature, ‘enclosing’ the user on four sides to reduce the chances of a fall. It also allows users to operate two-handed tools with ease, making it an all round safer choice than a step ladder.

Most podium steps also come with struts or supports of some form which sit near the base, giving the structure a wider footing. This provides much needed stability when working on the enclosed podium, and again makes it a superior alternative to the step ladder in many situations.

A feature which is by no means unique to the podium step, but further adds to its adaptability, is the removable/lockable wheels found at the bottom of each leg. These allow the podium step to be moved around a room or worksite with ease. This is considerably more convenient than the typical step ladder, which has to be folded and carried when needed elsewhere.

Shortcomings of the step ladder

Conventional step ladders are great for everyday use around the home or for odd jobs which require a bit of extra height. Their compact profile when folded away suits this model of use well and the fact that they are not especially stable isn’t too much of an issue when they are only being used occasionally.

When it comes to use on a work site however, these features, or lack thereof, make the step ladder a poor choice in many scenarios. As a result, the podium step has become a popular alternative to the stepladder, showing itself highly capable when it comes to providing a safe, strong working platform for professionals tradesmen.

Stepladders do not usually possess the same structural strength as podium steps due to their less robust frame. This means they are less able to safely support the full weight of a worker and their tools. Their comparatively thin frame, which often does not have the additional supports found on a podium step, also makes stepladders significantly less stable. This can be dangerous in work situations where workers need some additional reach to complete tasks.

Cases where the podium step is king

Podium steps come in many different configurations, meaning you’ll always be able to find the right solution for any work site. Specialised examples include podium steps with legs designed specifically to rest on steps, podium steps with a single sided work platform which allows the user to work flat against a wall, and lightweight podium steps made out of glass-reinforced plastic.

As these many individual designs demonstrate, adaptability is a major strength of the podium step as a tool. The fact it has been reworked and redesigned for use in so many different scenarios speaks volumes of the concept behind its design.

As we previously mentioned, the key features of the podium step are its excellent stability and the caged podium which provides an added level of safety for users working at height. Together, these features make the podium step a stronger, safer and more stable alternative to the conventional stepladder. For elevations higher than a few metres, scaffold platforms are a much better alternative to both podium steps and ladders

For indoor and outdoor work the podium step excels at providing safer working conditions at minimal height. Many jobs require users to frequently swap between a selection of different tools. Many tools also require two-handed operation for safety, and may require extended reach which could result in a conventional stepladder tipping over.

The superior weight specifications offered by podium steps make them far superior to stepladders in heavy-duty applications. Such applications may include accessing control panels, window fittings or roof-edge guttering. All podium steps are required to adhere to the European EN 131 (professional and non-professional) safety standards, which ensure they are fit for use in common work applications.

If you would like to learn more about our podium step solutions, please get in touch today.

PreviousWhat is a tower scaffold?
NextSafety difference between stepladders and podium steps