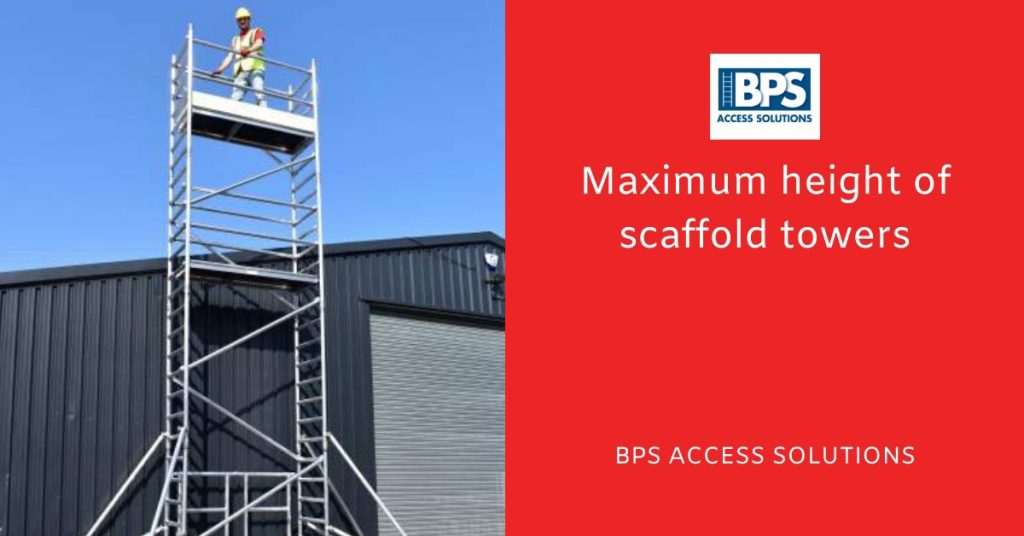 They’re great for use in many situations because they’re simple and easy to set up. But one of the fundamental drawbacks of ladders is their instability at height. If a worker is carrying out work on a standard two-legged ladder, even with extra support in the form of ties or stabilisers, there is a high chance of the ladder becoming unbalanced if it extends above a few metres in height.

As an example, the step ladder is specifically designed to be used at low heights, as it can support itself on its own four feet, and doesn’t have to be attached to an additional structure. This gives step ladders a distinct advantage over two-legged ladders when it comes to providing a stable working platform for workers. The only issue is that step ladders do not provide much more than a couple of metres height before they, too become unstable.

Luckily for professionals, however, scaffold towers have emerged as an ideal solution to the age-old trade-off between the positives and negatives of the two-footed ladder and the step ladder. By taking the step ladder’s primary selling point, its four legs, and combining it with the additional reach which makes the two-footed ladder a great choice in many situations, scaffold towers have become a highly adaptable height access solution.

What are scaffold towers?

As their name suggests, scaffold towers are effectively smaller versions of the full-size scaffolding frame which are often seen adorning the faces of large buildings currently under renovation or some other considerable construction work. Where full-scale scaffolding can be built around almost any shape, scaffold towers are limited to a fixed, rectangular base. From the base, the main support beams rise straight up, with structural beams and supports crossing between them to provide structural integrity. At the top of the scaffold tower there is a working platform which is usually surrounded by support rails to protect workers. To provide access to the working platform, scaffold towers usually have some sort of ladder which is either fixed externally or within the main frame.

As with any piece of equipment, there are still some obvious usage restrictions and technical specifications which workers need to bear in mind when using scaffold towers. For many individuals with a less regular need for a full-scale scaffold tower, it can be tough to justify the cost of buying a full scaffold tower system which would usually see industrial use. As a result, many manufacturers now sell DIY scaffold towers. These are simplified tower scaffold systems which can be set up at home.

When is it safe to use a scaffold tower?

Perhaps the most important consideration to bear in mind when setting up a scaffold tower is the working surface upon which it will be placed. Scaffold towers can be used indoors and out, but outdoor worksites come with many more variables and often much less stable ground. Placing a scaffold tower on a surface which is not firm, or stable can greatly increase the risk of the risk of the structure becoming unstable when a worker goes to use it. As a result, additional precautions, such as ground mats or foot supports can be used to provide a firmer base for the structure if needed.

Another key factor to bear in mind when using scaffold towers is the height at which the worker will be operating. As with any structure, the stability of a scaffold tower is directly related to the ratio between its base and height. The wider the footing of the scaffold tower, the more stable it will be with additional height added on top. Stabilising legs can be added around the bottom of the structure to effectively increase the size of the structure’s base, while keeping the vertical beams in the same position.

The height of a scaffold tower

Most scaffold towers are modular in design, meaning that they can be constructed to specific user requirements by having individual components which fit together as needed. When it comes to a maximum height restriction for scaffold towers, the main source of reference should be the guidelines provided by the manufacturer. Each system is designed and tested under specific conditions, meaning that the manufacturer is always the best source of information about individual product’s performance. The old rule of thumb used to be a 3:1 ratio between a scaffold tower’s height and its shortest base dimension. This no longer applies as there is now a much more complex and accurate calculation used by manufacturers when determining a scaffold tower’s maximum height.

Some may be tempted to push the boundaries when it comes to using a scaffold tower past a certain height. This comes with very high risks and a real chance of serious injury or death to workers both on and near the structure. Falls from height are still the leading single cause of death at work in the UK, so there is nothing to be gained from seeing how far you can push a scaffold tower’s limits.

If you would like to know more about the range of access towers or DIY scaffold towers we have in stock, please get in touch.