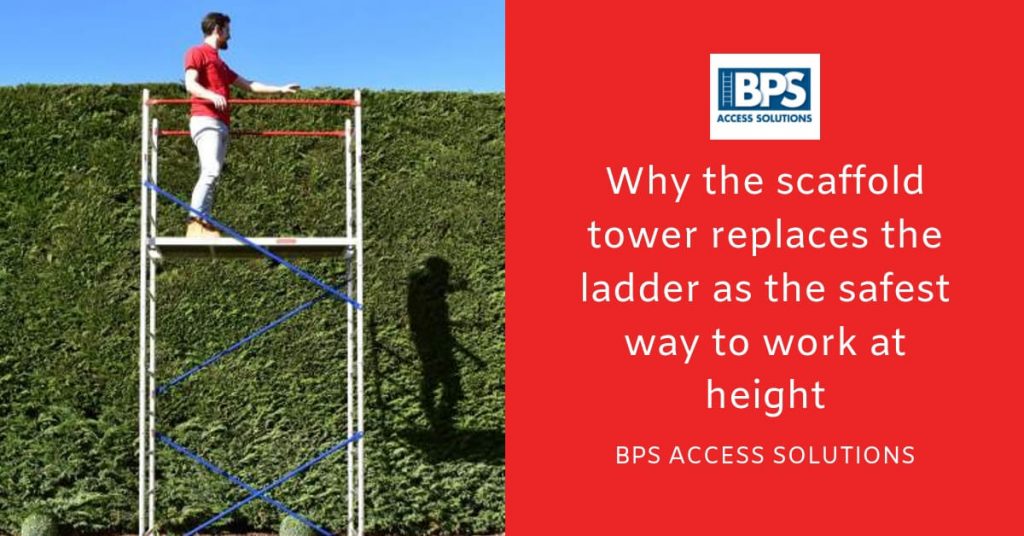 The conventional, two-legged ladder is an ancient invention which has been around for thousands of years. The fact that the same basic design is still used today is a testament to the effectiveness of the concept behind the design. The stepladder, on the other hand is a much more recent design, which wasn’t invented until 1862, when American inventor John H. Balsley patented his four-legged, foldable ladder design.

The two-legged ladder and its cousin, the four-legged stepladder, have been vital pieces of equipment for people working at height for many years. They both serve their own functions in the modern-day workplace, but a new contender has shown that ladders are no longer the best piece of equipment for the job in many cases.

The scaffold tower combines the key features of conventional ladders and scaffolding to provide an unbeatable solution for working at height. Below we’ll explain what exactly makes the aluminium scaffold tower so great at what it does.

The origins of the scaffold tower

Like ladders, scaffold towers can trace their origins back to ancient history. Scaffolding has been used in building construction for thousands of years. Scaffold towers stand on their own, without the need for support from other structures nearby. In recent years this has made them increasingly popular on worksites.

Falling production costs, increasing safety regulations and better production methods have all combined to push the popularity of aluminium towers to new heights. Ladders, while still effective at what they do, simply can’t compete with scaffold towers when it comes to user safety.

Features of the scaffold tower

Modern scaffold towers are usually made from tubular aluminium bars and can sometimes be made from steel. Aluminium is a lightweight metal which is very strong when formed into certain structures. In the case of aluminium towers, aluminium provides the perfect combination of weight and strength, allowing the towers to be moved easily but also making them strong enough to support workers, equipment and also protect against other objects on the work site.

Most aluminium towers have a modular design, which means additional height can be added when needed. This is a major advantage, and means that the tower is not limited to use only in specific situations. Unlike conventional, large-scale scaffolding, the individual components of an aluminium scaffold tower piece together using fittings which do not require nuts, bolts, or any other complex manual fixtures.

Many aluminium scaffold towers have wheels at the bottom of each leg which allow users to move the tower around a work site with ease. This a key feature which brings the mobility typically only found in a ladder to a structure which has the height and strength of a conventional scaffold. These wheels can be locked in place when the aluminium scaffold is in use to reduce the risk of injury to users on the working platform. Although it is not a feature strictly limited to scaffold towers, they can be made out of non-conductive materials to meet safety requirements in situations where electric shocks are a risk factor.

Where the aluminium scaffold tower outperforms the ladder

Aluminium towers outperform ladders on the worksite in a number of different ways. Many people think that the aluminium scaffold tower is only suitable for indoor use, but in reality, a scaffold tower can also be used in outdoor work environments, provided the floor surface is suitable and free from obstructions.

Two-legged ladders are severely limited by their inability to support themselves without leaning against another structure. Whilst they are still able to perform their main function in many situations, they are unsafe in comparison to scaffold towers. A scaffold tower can stand upright on its own four feet, allowing workers to safely reach ceiling-mounted fittings in the middle of rooms, or other hanging objects on a worksite. In this way they are much more similar to stepladders, but add an extra dimension of safety for workers.

Modern-day ladders are much stronger than traditional wooden ladders thanks to advances in materials and construction methods. But ultimately, they are still just two legs with rungs between them. Combination ladders, for example, combine the features of the step ladder and the extension ladder, but their frame is much less robust than an aluminium scaffold. In applications which require workers to carry heavy equipment, or even multiple workers carrying out tasks at once, aluminium scaffold towers are far superior. From a health and safety point of view, there isn’t much equipment to provide additional height that is safer than aluminium scaffold towers.

Step ladders are able to provide stand-alone stability thanks to their four-legged frame. However, they lack a safe platform for workers to stand or use their tools. Aluminium towers have a solution to this problem in the form of an enclosed working platform, which is positioned on top of the main frame. The working platform is enclosed on all sides, meaning workers cannot fall off by accident. This is far superior to the working position at the top of a working ladder, where a worker needs to keep one hand on the ladder to remain supported, and can also fall backwards very easily.

Ultimately, scaffold towers take everything many different types of ladder can do, improve on it and do it better themselves. If you would like to know more about aluminium scaffold towers or any of the other aluminium towers we stock, please get in touch today.

PreviousThe work at height regulations 14 years on: has it been a success?
NextHow long can you use ladders in various situations?