The different types of scaffolding towers 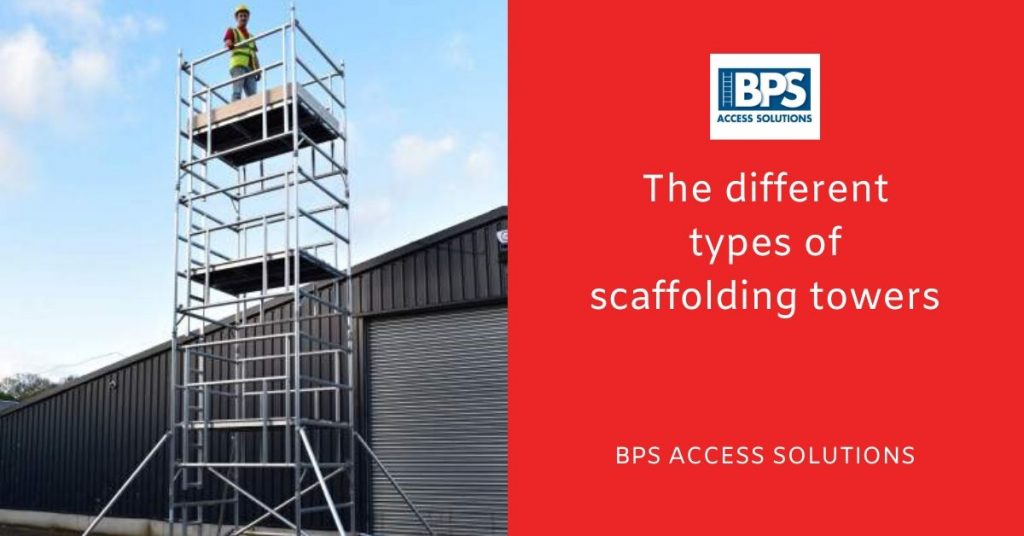 The different types of scaffolding tower

Scaffolding towers, much like ladders, come in many different shapes and sizes. Each type of tower scaffolding has its own specific purpose and strengths which can be specific to a variety of work situations.

The main features of tower scaffolding which make it a superior alternative to ladders for many worksites is its height and stability. Because standard ladders are narrow and only have two legs, they can be unsafe when used in situations which require higher reach or support for heavier equipment.

Generally, scaffolding towers come with four legs and a much stronger frame thanks to additional support struts and crossbeams. A wider footing allows these structures to be built and used safely at greater heights than normal ladders. Guard rails and strong working surfaces also allow users to safely operate equipment with both hands at height.

Because each different type of scaffolding tower is designed with a different purpose in mind, it can be hard to know which should be used in any given circumstance. Below we’ve outlined some of the main types of tower scaffolding, what they’re good at and how to recognise them.

Many high-rise buildings have small cranes which can be used to suspend and lower window cleaning platforms. In the case of construction sites, temporary suspended scaffolding systems can be installed to lift building materials to the top of the structure or allow workers to work against the side.

A suspended scaffold can also be a good alternative for use in situations where the ground surface is unsuitable for erecting a normal tower scaffold.

One of the most important aspects of a safe scaffolding platform is the ground it is built upon. Mudsills are the first component to be laid down and will often come in the form of wooden planking. They are attached to base plates at the bottom of the scaffold uprights, which will usually have some sort of jack mechanism to fine tune the elevation of the scaffold depending on the ground surface. The purpose of the mudsills and base plates is to spread the downwards force of the scaffold over a wider surface area to give the structure a firmer footing.

The most common type of scaffolding, which you will often see adorning buildings undergoing renovation, is tube scaffolding. Unlike scaffolding towers, which usually consist of one working platform with four edges, tube scaffolding can be theoretically be built around large areas due to its fully-customisable construction.

The tubular poles can be arranged in any shape required and are held together by couplers and clamps. The poles typically used in this form of scaffolding are heavy and the structures themselves can be labour intensive to install because each coupler and pole must be inserted individually. Guard rails and toe boards can then be installed at the top to create a working platform just like you would find in other types of scaffolding.

Supported scaffolding has a number of key components which are required to keep the structure held firmly in place, including poles, legs, posts, frames and uprights. The scaffolding structure is then kept in place by supports, which can come in the form of outrigger beams or other rigid structures.

The scaffolding is then connected to the building structure by guys, ties or braces, which should be installed on every horizontal member at the 4:1 height ratio. These should also be installed vertically and horizontally on every member, based upon the guidelines found in the OSHA guide to Scaffold Use in the Construction Industry.

The rolling scaffold is generally better suited to indoor use due to its wheeled legs. While rolling scaffolds can be used outdoors, it is only safe to do so when placed on a flat, smooth surface. When in use, the wheeled feet must be firmly locked to ensure there is no possibility of movement whilst a worker is on top of the platform.

A Rolling scaffold is also smaller than other types of scaffolding tower, usually only comprising a small working platform sitting above the vertical scaffolding frame. There are a number of different access methods which workers can use to reach the top of the working platform, the safest of which involves climbing a stairway or ladder within the frame of the scaffolding tower. This way, workers are enclosed within the structure and protected from falling by the frame.

Mobile scaffolding towers will often have additional support struts extending outwards near the base of the tower to provide additional stability. When moving rolling scaffold towers, they must first be reduced to below four metres in height and the surrounding site must be checked for obstacles which could come into contact with the tower when moved.

A newer technology which performs much the same role as rolling scaffolding is the suspended lift or cherry picker. A platform is mounted on an extending arm on top of a motorised base which can be moved around site. An operator then sits in the enclosed lifting platform and can remotely move themselves to positions of height where they can perform visual inspections or light maintenance work.

If you would like to find out more about the wide variety of scaffolding systems which could help your work site, please contact us today.

PreviousFive reasons why a mobile scaffold tower is the best way to work at height
NextThe work at height regulations 14 years on: has it been a success?