What is a tower scaffold? 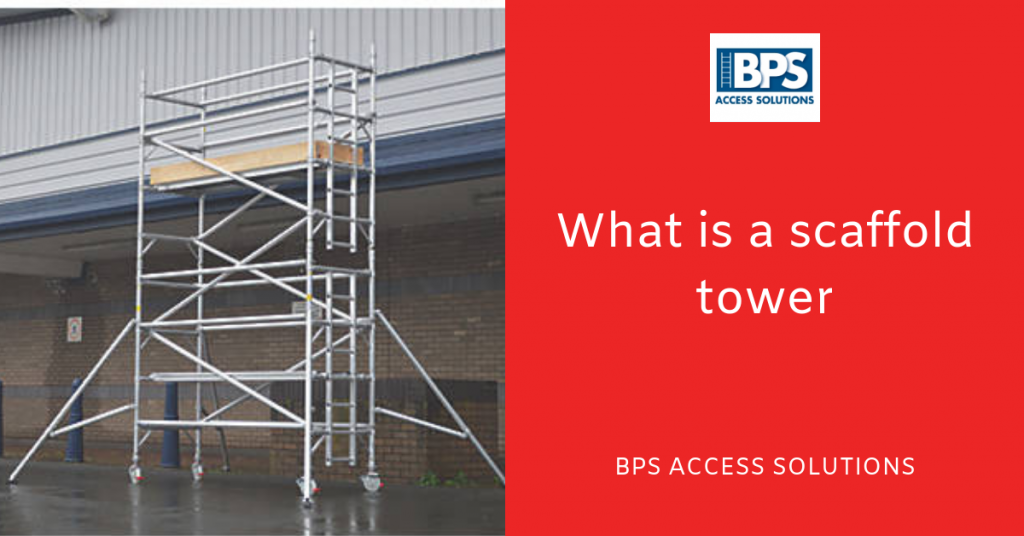 There are many different types of climbing equipment, each specialised with different uses in mind. The humble ladder comes in many forms, and you’d be hard pressed to find any tradesman without one of some kind.

However, when it comes to heavy-duty, on-site applications, standard ladders often aren’t enough. Besides the fact that most of them can’t reach all that high, they are too instable to be used in tandem with heavy equipment and are often not strong enough to hold a substantial amount of weight.

For these more heavy-duty jobs, for example installing ceiling fittings in high-ceilinged rooms, stability is paramount. In these cases tower scaffolding is the go-to option, but many people are unfamiliar with using a tower scaffold in most everyday situations. We’ll outline what exactly a tower scaffold is, what it’s good for and what to look for when buying one.

Unlike the standard ladder, scaffolding towers have four legs which give them a much firmer footing. This allows users to work with both hands and greatly reduces the chance losing balance.

Because tower scaffolds can be erected much higher than standard ladders, they can be used in situations where normal ladders are too short. The extra stability given by four legs comes with some added risks. Scaffolding towers can often be built many several metres high, so if a fall does occur the risk of serious injury is much greater.

Guard rails are installed on top of the tower scaffold to give users a firm structure to hold on to. Safety harnesses can also be used when climbing scaffolds for an extra line of security in case of a slip.

Falls from height are by far the most common single cause of death among workplace accidents in the UK, so you can never be too cautious when working with tower scaffolding.

Tower scaffolding has a series of support beams across its structure to provide additional rigidity and strength. This can be crucial when working outdoors, where external factors such as wind or weather can cause the scaffolding to wobble.

These cross beams also greatly improve the strength of the structure, allowing users to work with heavier equipment when needed.

How to build a tower scaffold safely

Because tower scaffolding is typically used at much greater heights, there are many extra safety precautions which must be taken to use it safely.

As with using standard ladders, one of the first precautions which must be taken when erecting tower scaffolding is a thorough assessment of the surface it will sit upon.

If scaffolding is erected on unstable or uneven ground, the chances of an accident occurring due to a user losing their balance are much higher.

Erection is one of the most dangerous stages involved in the use of scaffolding towers. To ensure the process is as safe as possible, the Prefabricated Access Suppliers’ and Manufacturers’ Association (PASMA) has approved two methods of scaffold tower construction.

The first method of construction uses an advanced guard rail system which is gradually moved up the scaffold tower as each new level is constructed. Because the tower is constructed by workers from beneath, the chances of falling are greatly reduced.

The second method of construction, known as the ‘through-the-trap’ method, involves constructing new platforms through a trap door in the middle of the top floor surface. Again, this method allows new levels to be constructed with minimal risk to the user.

To give the scaffold tower extra stability, additional stabilisers and outriggers can be added to the base. Tower scaffolding should only ever be constructed by fully trained individuals and never build beyond manufacturer guidelines.

How to use a tower scaffold safely

There are some key guidelines which should always be followed when using tower scaffolding to ensure the safest possible working conditions.

Many scaffold towers have an internal set of stairs or ladders for workers to reach the top of the structure. Certain types of tower scaffolding have rungs on the outside which have a special grip surface applied to them. Extra care should be taken when using this second type, as climbing on the outside of a scaffolding tower greatly increases the risk of falling and can result in severe injury or even death from significant height.

When using tower scaffolding, you should never use the tower as a support or frame for other pieces of equipment. For example, placing a ladder against a scaffold tower can severely compromise the stability and strength of the structure.

Tower scaffolding is built to strict manufacturer guidelines and by introducing outside forces, the risk of something going wrong is greatly increased. This includes working in bad weather conditions, where wind or rain can negatively affect the tower or worker’s stability.

Additionally, a scaffold tower should never be used if pieces are missing or broken. Even one small missing screw or weakened beam could result in failure. Manufacturers build their products with a certain degree of redundancy in case of situations like this, but you should never knowingly use a tower with broken parts.

In many situations a tower will need to be moved around a workspace to access different areas. Some scaffolding towers are designed with wheeled feet to make the process of moving easier. Ensuring that these wheels are securely locked when the tower is in use is one of the most important safety precautions.

Larger scaffolding towers tend to have a static base and are often erected with additional stabilisers to increase their footing. When moving static scaffolding towers, they should always be reduced to under four metres in height. This will lessen the chances of the tower falling over whilst being moved.

An assessment of the surrounding area should also be carried out to ensure that there are no obstacles such as overhead power lines or holes which could result in an accident. As previously mentioned, all construction, movement and deconstruction work carried out on ladder scaffolding should be carried out by fully-trained individuals only.

PreviousWhen should a mobile scaffolding tower be inspected?
NextWhat are podium steps?